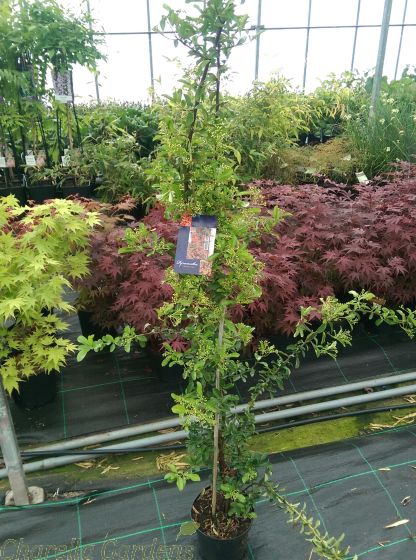 Large plants approximately 150/175cm tall. Highest Quality - Exactly as you see in the picture. Orange Glow is one of the most thorny Pyracantha available.

Pyracantha Orange Glow 3 litre 150/175cm: Orange Firethorn is an upright, dense and extremely prickly arrangement, living up to its evocative name with a mass of bright orange berries borne in autumn after profuse clusters of white flowers in summer. Pyracantha foliage is small and dark green. Excellent for impenetrable hedging or as a wall plant. It is an excellent versatile shrub for planting in a variety of ways although it is probably best used to create a dense evergreen hedge or trained to cover a wall. Pyracantha produces fragrant white flowers in Late April - June followed by orange berries it’s also a great plant for attracting wildlife into your garden particularly during the winter where birds like to feed on the berries or nest amongst the evergreen branches they are easy to grow and require very little maintenance.

What to expect: Your plants will arrive with an actual plant size of 150/175cm Planted in a 3 litre pot.

Ideally planted in full sun to encourage berries, although they will be fine in partial sun. They can be planted in most soil conditions but thrive in fertile well drained soil. Before planting prepare your soil with some fertiliser this will help to get the plant established. Watering will be required whilst the plants become established, but once they are this will seldom be required except, like most plants, in the garden, during very dry spells. Feed early winter with a general purpose fertiliser. This plant has no special requirement during the winter months. Ensure a good water supply this is especially important whilst becoming established.

Pruning - Pyracantha is very low maintenance but care must be taken when pruning so as not to remove too much of last years growth. New growth appears mainly on shoots from the previous year, so it is advisable, when pruning, to retain as much of the old wood as possible. The ideal time to prune is when the plant is in flower to ensure the berries are best shown later in the year. If your pyracantha is to form a tight hedge in a particular shape then we suggest you prune 3 times a year.

Planting Position: Full sun through to partial shade either against a wall to create a climbing hedge or a standalone bush.

Soil: Suitable for any type of moderate fertile soil including very dry through to heavy clay as long as it is not prone to becoming waterlogged.

Suitable for container planting: Possible but not an ideal scenario.

Eventual height and spread: 3/4 Metres with a similar spread.

Flowering Period: Early spring through to mid-summer. With orange berries in autumn

Pruning: New growth appears mainly on shoots from the previous year, so it is advisable when pruning to retain as much of the old wood as possible, also responds well to heavy pruning where it has become overgrown and untrained. If you choose to have it as a freestanding shrub only dead or damaged shoots