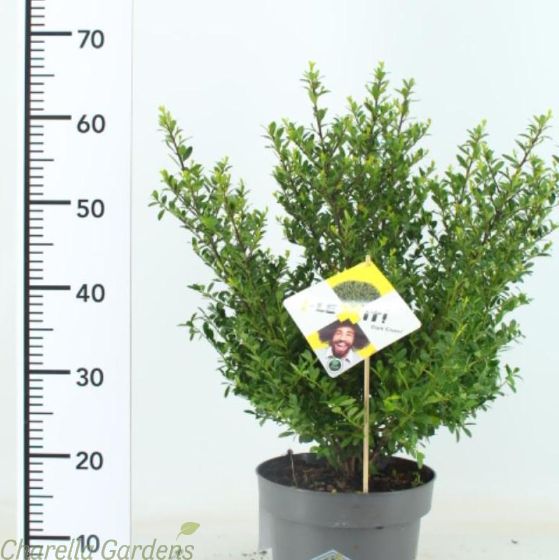 Out of stock
Quick Overview
Ilex Crenata Dark Green Hedging plants, similar to Buxus but without the associated problems.

What to expect: Our Ilex Hedging is supplied well established in 5 litre pots, current height is 50/60cm, as pictured.

Nutrition: Fertilizers should be applied after the first year of planting. Two applications should be done each year, once at the beginning of April and again at the end of June. Sprinkle the fertilizer directly on the soil around the plant. Never sprinkle over the leaves as this may result in leaf burn. Organic fertilizers are preferred since the nutrients are released slowly into the soil and the effect is long lasting. Organic fertilizers are also better for the environment and ensure optimal soil structure, which is very important for the health and longevity of the plants.

Planting Period: Plants in containers may be planted any time of the year so long as there is no frost.

Soil: Ilex Crenata has fine and densely branched roots that do not grow deep into the soil. The structure of the topsoil is very important for Ilex. The ideal soil is rich in humus with good drainage, remaining only slightly damp after watering. Avoid boggy or wet soils (clay, loam), as well as strong alkaline soils (rich in lime with pH 7.5-8.0)

Planting Ilex Crenata Dark Green:  Best results are obtained if the hole is approximately 50cm deep. The soil in the hole should be loosened and mixed with a 50-50 ratio of peat and universal soil improver. Ideally your soil should be pH neutral or slightly acidic (with a pH of 5.5-6.0) Strips for testing soil pH that allow you to measure soil acidity are available. Remove the plant from the pot and rub the soil to loosen the roots. Then plunge the root area of the plant in a bucket of water long enough to fully absorb the moisture. See to it that the planting depth is such that ball is approximately at ground level; the top of the rootball should be level with the surrounding soil. Make sure the soil is firmed down well around the plant (but not compacted) so that there are no air pockets where frost could form. To form a dense hedge, the plants should be planted close to each other. Tip: Ilex crenata dislikes gravel and dolomite.

Pruning Ilex Crenata: Can be easily pruned to form a hedge, sphere, block, pyramid or various fantasy shapes. Pruning is done twice a year, first at the end of May or early June and then again at the end of August or beginning of September. Prune hard in May/June such that you cut part of the mature foliage and not just the new buds; this helps the plant to rejuvenate. Prune superficially in August/September so that only new shoots and buds are clipped. Pruning twice a year helps the plant to branch out well and to maintain a tight form. Never prune on very hot days.

WATERING VERY IMPORTANT! It is preferable to water very thoroughly twice a week than to water the plants only slightly every day. Sufficient moisture is needed to prevent the soil from drying up. Ilex is sensitive to competition from nearby plants that uptake water and nutrients from the soil. Check regularly that the roots are moist. Try to anticipate water loss rather than waiting for the plant to show signs of stress. Avoid over watering the plants; too much water will lead to the decay of the roots and ultimately the death of the plant!

Problems: The plants are grown in a natural way and have the enough vigor for self-protection. No specific diseases affect the plant. Urgent treatment is hardly ever necessary, not even against mold and caterpillars.