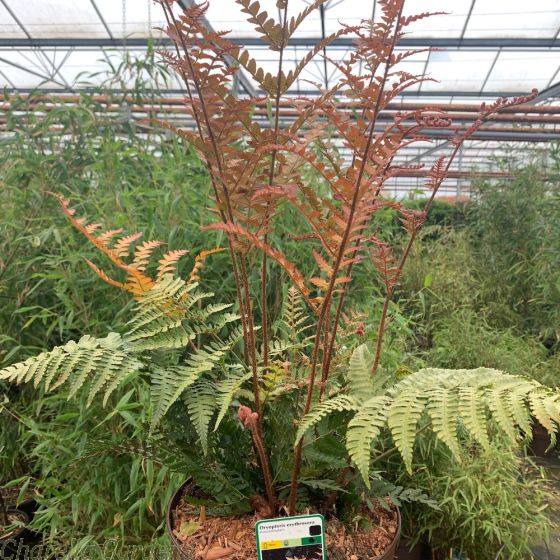 Established plants in 5 litre pots ideal for shady damp araes in the garden.

Ferns 5 Litre - Upto 4 varieties: Ferns are highly versatile, ancient and mysterious plants which require very little care and attention and are untroubled by pests and diseases. They have marvellously intricate foliage with architectural pinnate leaf forms which look particularly beautiful as they erupt from new fronds. Growing best in dappled shade rather than complete darkness.

Dryopteris Erythrosora 5 Litre: Often referred to as Autum Fern due to the rust colured new fonds. deciduous fern has triangular-shaped fronds, which are coppery-red when young and slowly mature to dark green. For best results it will need plenty of moisture it gives a good contrast planted with more traditional green ferns. Maturing to approximately 60cm with a 40cm spread.

Dryopteris Filix-Mas 5 Litre: Capable of living and thriving in even the darkest of shade A native male fern found naturally in moist woodlands around the UK. This large, deciduous fern has feathery, green fronds which form a distinctive, shuttlecock shape and turn coppery in autumn maturing to approximately 1 metre with a similar spread.

Dryopteris Filix Mas-Linearis 5 Litre: Dryopteris filix-mas ‘Linearis’ is a male fern with graceful, skeletal-like pinnae, giving it an unusual spiky appearance. It’s perfect for growing in a range of shady situations, and works well alongside other shade-loving plants such as hostas and hellebores. Although deciduous, the frosted fronds provide winter interest and are worth keeping until spring. The Royal Horticultural Society has given it the prestigious Award of Garden Merit.

Polystichum Polyblepharum 5 Litre: Stiff, erect, lance-shaped, fronds form a distinctive shuttlecock-like shape. New fronds of this evergreen fern are covered in golden hairs as they unfurl. Perfect for providing all-year round interest for a shady borders.