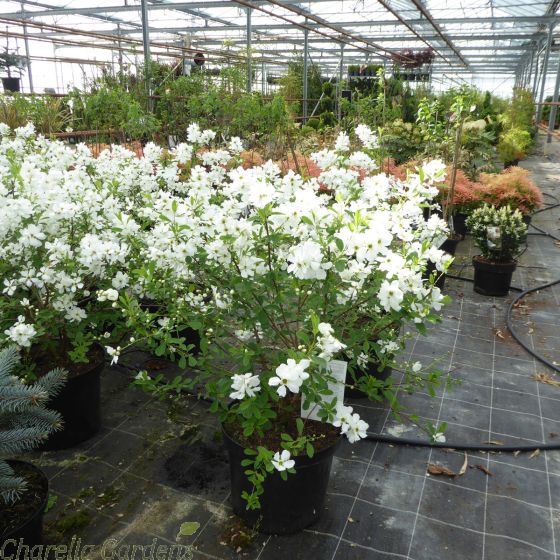 Out of stock
Quick Overview
Large Exochorda Racemosa Niagara, planted in large 10 Litre pots, ideal for sunny to lightly shaded borders or pots on the patio.

Exochorda Racemosa Niagara Large. 10 Litre Plants. This hybrid form is a cross between Exochorda Racemosa and Exorchada Macrantha 'The Bride' and the resulting plant shows the best characteristics of both its parents. It is shrubbier than 'The Bride', with less splayed branches, but best of all, it produces masses of flowers. Niagara is a deciduous hardy shrub, relatively compact and can be grown in borders or large pots.

A virtually maintenance free plant that requires very little attention. For a timely spring boost try applying a slow-release balanced fertiliser and a mulch of well-rotted garden compost around the base of the plant in early spring.

Niagara’ was raised in Holland by Herman Geers, who has also raised some excellent weigelas. He crossed an unnamed plant of E. Racemosa with ‘The Bride’ in 1994 and selected this seedling in 1997. As ‘The Bride’ itself has Exorchorda Racemosa as one of its parents, ‘Niagara’ has a big dose of E. Racemosa in its parentage – but is still much more compact.

Height at maturity approximately 1.5 metres with a similar spread.